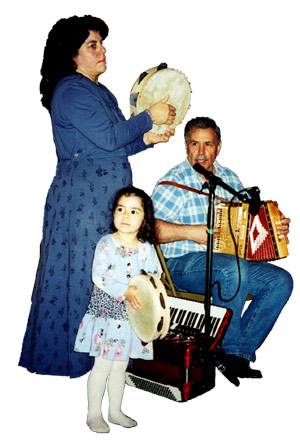 Celest DiPietropaolo was born in Evanston, Illinois, and received his B.S. degree in Mathematics from Loyola University in nearby Rogers Park (Chicago), where he grew up. After receiving a commission in the U.S. Army, he studied at and received a M.S. degree in Theoretical Mathematics from DePaul University. After completing a tour of active duty in Georgia; Massachusetts; Arlington, Virginia; and Southeast Asia, he studied at and received his M.S. in Applied Linguistics from Georgetown University. He also completed many of the requirements for the PhD program in Operations Research at The George Washington University. Celest started his career in IT in 1965, and has worked proportionately in the areas of programming, simulation and modeling, and network support. He recently retired from the U.S. Navy, where he had been working as a computer specialist.

Celest started studying the accordion classically when he was seven years old, began playing professionally at the age of sixteen for parties and local restaurants, and continued while working his way through the universities. In 1969, while on assignment in Arlington, he discovered the joys of ethnic dance in the weekly-met IFD group led by Sam and Sarah Stulberg; much of the music being reminiscent of the neighborhood sounds of his youth (Irish, Yiddish, Slovenian, Bohemian, Polish). During the 1970s, he danced and played accordion with Balkan, Scandinavian, Polish, Bulgarian, and Swiss performing groups in the Washington, D.C. area. Celest also plays diatonic accordion.

In 1976 Celest founded the Italian Folklore Group of Washington, D.C., and was its director for 18 years. IFGW was comprised of about 15 Italian-born and 15 American-born singers and dancers. Also, he was one of the founders of the Italian Folk Art Federation of America and served as its chairman of folk dance for many years.

During these years, Celest suspected that Italians still practiced traditional music and dance. After long conversations with Alan Lomax, who with Diego Carpitella had documented music traditions in remote Italian villages in 1954, Celest became impassioned in his search for those dances. After politely declining Lomax’s invitation to study with him at Columbia University and help develop the Global Jukebox Project, Celest sought out ethnomusicologists and dance ethnologists in Italy to help him locate venues where traditional music was still practiced without the influence of tourism, media, or classical dance; recognizing that a dance can only be considered traditional if it satisfies the constraints of the community in which it originates.

Celest has researched traditional village music and dance from the mountains of southern, central, and northern Italy (including Sardinia) since 1983. Celest and his wife Marie DiCocco lived and worked in Italy from 1995 to 1998. Since they were living in the geographic center of Italy, it afforded them the opportunity to research dances anywhere in Italy within a half day's drive. He has spent approximately ten percent of his life in Italy, where he became fluent in Italian and familiar with the different dialects and local-cultures.

He has exhibited traditional music at all of the major festivals in the Washington, D.C. area, including those sponsored by the Smithsonian Institution, Folklore Society of Washington, and the Italian Embassy. He has been teaching Italian traditional dances since 1984 all over the United States—-7 regions, 20 states, and 40 cities, including Florida Folk Dance Camp, Friends of International Folk Dance Weekend in New Orleans, Annual Mendocino Folklore Camp, Annual Chicago Festival of Folk Dance, Folklore Village Farm, and Texas Thanksgiving Camp. A more comprenensive list is available at Teaching History.

Marie Luise DiCocco was born in Chicopee Falls, Massachusetts, and spent most of her formative years traveling as part of an Air Force family. As a young child, she grew up hearing the sounds of Italian and German music in her family, along with other ethnic music which her parents enjoyed. She began studying classical accordion at the age of eight but, after one year of formal lessons, her family moved and she continued playing on her own. She grew up playing primarily German music, receiving packages of sheet music from her German grandmother on a regular basis. In 1975, she graduated from Catholic University in Washington, D.C. with a degree in Biology.

At the same time, she began studying the accordion once again and began her performing career, playing for musical theatre throughout the Washington, D.C. area. From 1976 to 1990 she arranged music for and played with a contemporary liturgical music group in Silver Spring, Maryland. From 1983 to 1995 she performed regularly with the Washington Schrammel Quartet. In 1983 she met Celest while playing in the orchestra for a community theatre performance of "The Most Happy Fella" and began assisting him with his planning, research, and analysis of Italian traditional music. Prior to their move to Italy in 1995, she worked for various computer manufacturers, and from 1988-1995 was the network manager for Arlington County Government.

Currently, Marie owns an internet business called PM Organics that provides certified organic cotton fabrics and notions. She is also an emeritus member of the Board of Directors of The Real Diaper Association, and is active in local food co-ops. Celest and Marie have a daughter, AnnaMaria Rosina DiPietropaolo, who is homeschooled. The family, whose home is in Middlesex, Vermont, plays Italian music under the name "Italian Village Music and Dance" (Celest playing accordion and organetto, Marie singing and playing guitar and percussion instruments, and AnnaMaria singing, playing guitar and percussion instruments). They have been regular performers at Golden Festival since 2001, along with the New England Folk Festival, held annually in Mansfield, Massachusetts.